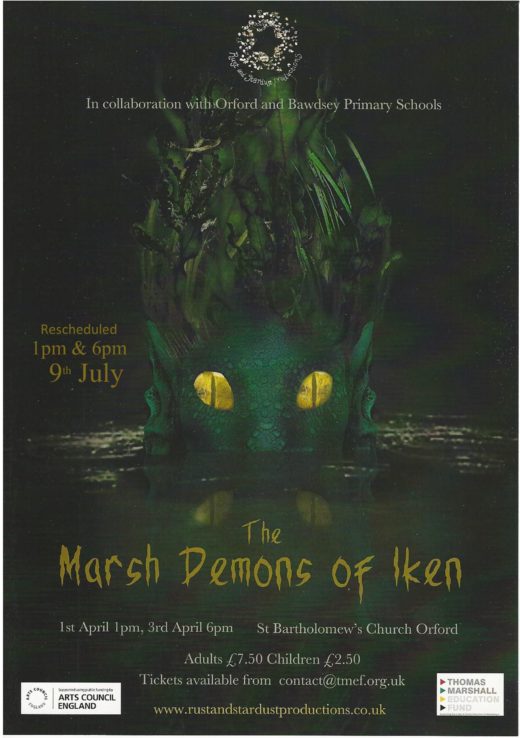 The planned collaboration between Rust and Stardust and Orford and Bawdsey Primary Schools was delayed by the COVID pandemic since last April but Eleanor, Katie and Martin from Rust and Stardust and the Orford school staff worked hard with years 4, 5 and 6 for a week in July to produce outstanding performances of The Marsh Demons of Iken in Orford Church on Friday 9th July. Unfortunately, the Covid guidelines dictated that we were not able to mix school bubbles, so we were without the children from Bawdsey School.

We were obviously restricted this year with the government COVID guidelines, but the seating was laid out to the guidelines and cleaned down before and between each performance and the audience was asked to keep their masks on during their time in the church.

Both main doors remained open during the performance to allow for air movement, with the south door designated as the entrance and the north door as the exit and wheelchair access. Unfortunately, we had to abandon the provision of refreshments, but as the show only lasted about 90 minutes, everyone coped without their usual cake and tea or something stronger.

A socially distanced, appreciative audience of 56 enjoyed the enthusiastic acting by the children and the professional actors, presenting the story of the mysterious Yarn Hill where Botolph reputedly drove away the ghosts and marsh demons in order to build his minster. It was eventually completed on the site of the historic church at Iken which still bears his name, and you can see St Botolph’s stone cross which is on display in that church.

The children’s play finished with the cast building a replica of the cross in Orford Church.

Comments as people were leaving included:

“Amazing seeing the actors use the whole of the church so effectively. My favourite memory is of the children when they mimicked bird flight, it really felt like air rushing past wings. Lots of special moments, and a great opportunity for Orford kids and great use of the church”.

“Spine tingling to hear the 20 children’s voices singing out from the choir stalls and continuing menacingly as they marched down the aisle as the mob of Marsh Demons”.

“Heartening to see the older children helping and encouraging the younger and less confident ones”.

The costs of this event were covered by an Arts Council grant plus a generous contribution from a charitable benefactor and programme sponsorship so that all ticket proceeds and donations went to the Thomas Marshall Education Fund to help fund their work supporting the young people of Mozambique to enable them to make a sustainable living and support their communities.