From time to time, Orford Museum stages exhibitions relevant to the local area such as the World War I exhibition in the Town Hall. An important and moving feature of the Town Hall exhibition was the display of information about the local men who were killed in the First World War. Now each of the parish churches – Boyton, Butley, Chillesford, Iken, Orford and Sudbourne – has its own folder on display containing the pages relating to those named on the war memorials. 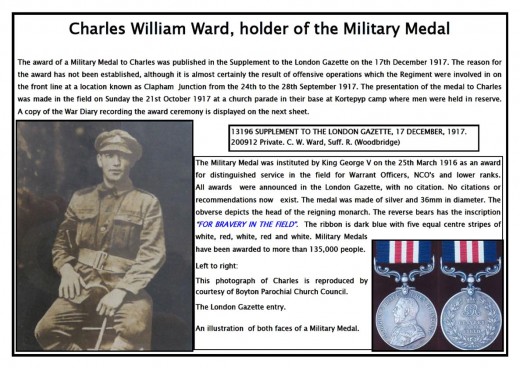 NOW WE CAN REMEMBER THEM

Everyone who attends the annual Remembrance Sunday service will have been moved to hear the roll call of names of the men who died for their country, read out village by village, followed by the words ‘We will remember them’.

100 years after the outbreak of World War I, Orford Museum displayed the results of the hard work by volunteer researcher Brian Boulton who has done his very best to discover as much as possible about every one of the 90 men who died in that war – soldiers, sailors and airmen – from Orford, Sudbourne, Chillesford, Iken, Boyton, Butley, Wantisden and Capel St Andrew. The World War I commemorative exhibition, held in Orford Town Hall on Friday 12th, Saturday 13th and Sunday 14th September displayed at least one page devoted to each man.

Appeals for information, published in The Link parish magazine, did produce a few responses and, best of all, some photographs and medals, but even when facts have been hard to come by, there was something about each man’s family and a picture of his grave or memorial. Attendance at the exhibition was reassuringly good

After the exhibition, special folders were compiled and presented to each parish church, so that they can be displayed near the War Memorials, helping future generations to keep the memory of the men behind the names alive.

The exhibition also looked at many aspects of life in our villages during World War I including airfields on Orford Ness and at Butley, schoolchildren given a day off to gather conkers, wounded soldiers nursed in the Cottage Hospital and a Prisoner of War camp on Orford Ness hit by an influenza epidemic.