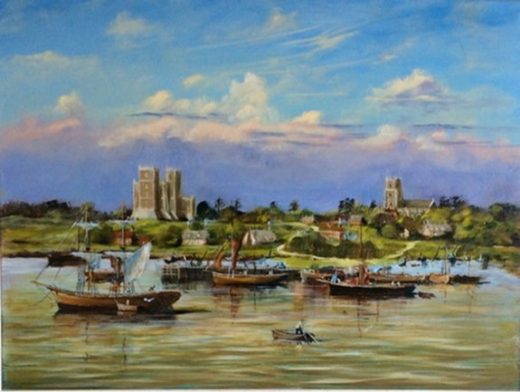 Like many vulnerable older people, local artist Jeremy Rugge-Price and his wife Paula have endured many months of COVID isolation and lockdown and, due to Paula’s permanent fortnightly blood treatments at Harefield Hospital, they are likely to remain so for the foreseeable future.
However, like many of the other vulnerable Orford residents, they feel that they are very fortunate to live in this village where the help, support and friendship of everyone; the retail shops, local businesses, the Parish Council and NOTT, families, and individuals has been massive and unending to make their situation so much easier. Some years ago, Jeremy donated his painting of the, now sadly demolished, Orfordness Lighthouse to the village and he would like to do the same with a painting of Orford in a bygone era based around much research and a painting by JMW Turner many years ago. He hopes that this gesture will go some way to saying thank you to everyone.

Jeremy is an internationally renowned marine artist and the Orford Business Association believes that this gesture would be a fitting memorial to the actions of the very many individuals who have demonstrated such community spirit during these unprecedented times. We would ask the NOTT to accept the paintings and display them in a prominent location in much the same way as the 3 paintings from the Wallace Collection in the Town Hall which a National Art Collection Fund report summed up well: ‘The group of paintings forms a valuable social document of the period and an interesting link with the founders of the Wallace Collection.’

Mr Rugge-Price’s work would provide both a reminder of the Lighthouse and of the efforts by the local community which resulted in the village being left virtually untouched by the current pandemic.

Anthony Jeremy Rugge-Price, was born in the Andover district of Hampshire on 23 March 1940.
He spent his younger years in Aldeburgh, Suffolk where he learnt the art of sailing under the beady eye of old Jumbo between Iken and Orford from 1948 for several years and this, along with skiing, became his lifelong passion.

Jeremy, as he was mostly known, was educated at Harrow, spending 1957-1960 in the Merchant Navy before following in his father’s footsteps and joining the army, serving in 13th/18th Royal Hussars. In 1976 he emigrated to New York and worked in the Restaurant and Public Hotel industries. In 1990 he gave up his day job and moved to Maine to teach himself to paint and by 1992 was exhibiting in galleries.

When his youngest son joined the Light Dragoons and was sent to Iraq and then Afghanistan, Jeremy and Paula came back to Suffolk while that deployment was active, intending to return once it was over, but they decided to remain here instead and have settled in Orford.

He has exhibited his historical marine art in galleries up and down the Eastern Seaboard of the U.S. for many years but now has reduced his output to the Landmark Gallery in Kennebunkport, Maine, the home of the Kennedy Clan and Artmarine.com one of the most prestigious marine galleries online.