Rust and Stardust return to Orford 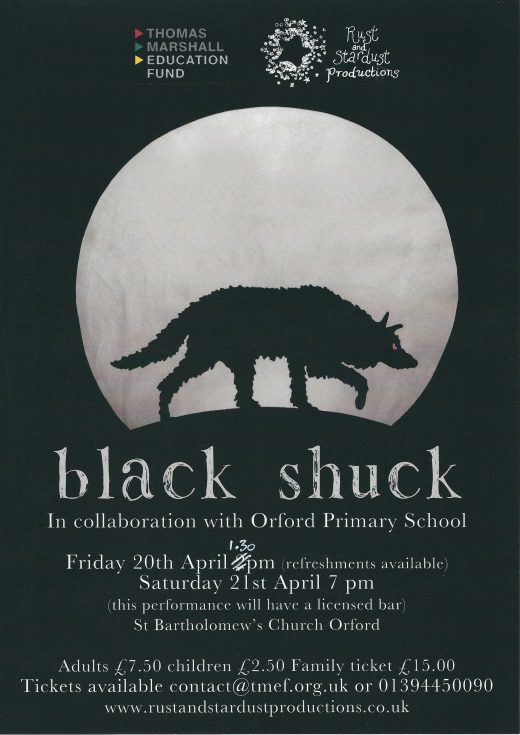 It is August 1577. In Blythburgh Church the congregation is sheltering from a violent thunderstorm when a deafening clap of thunder bursts open the church doors and a hairy black ‘devil dog’ comes snarling in. It runs through the congregation, killing a man and boy and causing the church steeple to fall through the roof. Scorch marks still visible on the church doors are purported to have come from the beast’s claws as it fled. He next appears 12 miles away in Bungay, where two worshippers are killed at St Mary’s church. One was left shrivelled ‘like a drawn purse’ as he prayed.

This beast was said to roam the East Anglian countryside spreading death and terror – a giant, ferocious hell-hound with flaming eyes and savage claws. For centuries, the beast that came to be known as Black Shuck struck fear into the hearts of all who crossed its path. Just a single glimpse was enough to impart a fatal curse; the briefest encounter sufficient to suck the life from any hapless victim.

But now fast forward to April 2018

St. Bartholomew’s Church in Orford will be the setting for a new puppet play by Sussex puppet company Rust and Stardust. This young and talented company will be returning to Orford to work with Orford Primary School Arts Award students to develop and present a retelling of the ghostly story of Black Shuck.

Following two previous visits in 2016 and 2017 when they provided workshops for the children before performing The Wild Man of Orford and The Green Children of Woolpit to enthusiastic and captivated audiences in Orford Church, they are now returning to work with the students to perform the story of Black Shuck. To witness the characters coming to life in the hands of these skilled puppeteers is a magical experience and something not to be missed. Suitable for all ages.

The company will be presenting performances on Friday 20th April (matinée) and Saturday 21st April in aid of the Thomas Marshall Education Fund so put these dates in your diaries.