“LIVING LETTERS” – FROM A TO Z, NOT FORGETTING &

Not open Tuesday to Thursday

More than 20 lettering artists and designers have each chosen an individual letter of the alphabet to create, using a variety of techniques and media. Seeing their individual approaches makes us look again at the 26 letters that collectively describe our world.

This new collection presents the work and imagination of today’s leading lettering artists as they pay homage to the DNA of our written communications. The variety of works in the Living Letters exhibition unveils pieces that are humourous, enigmatic, whimsical and scholarly. Letters are incised onto Welsh slate, printed by woodcut, or carved into oak and sycamore.

The marks we recognise today have been 5000 years in the making. Throughout history, their visible expression has been shaped by the technologies available, by fashion and imagination. They’ve been scratched, penned, brushed, printed, drawn, carved, cast and etched. But as well as being functional, letters hold great creative and graphic possibility as evidenced by this exhibition.

The collection brings together the work of masters of contemporary letter design such as John Neilson, Tom Perkins and Peter Furlonger.

‘Living Letters’ also reunites Master carver Charlotte Howarth and her former apprentice, Louise Tiplady. Through the Lettering Arts Trust’s apprenticeship programme, Louise was taught by Charlotte for two years from 2005 and is now an independent artist with an established reputation. Her playful work ‘Buzz’ demonstrates the creative possibilities of the contemporary makers.

Charlotte Howarth has created a study of ‘U’. Look carefully at the piece and you will see underwear… 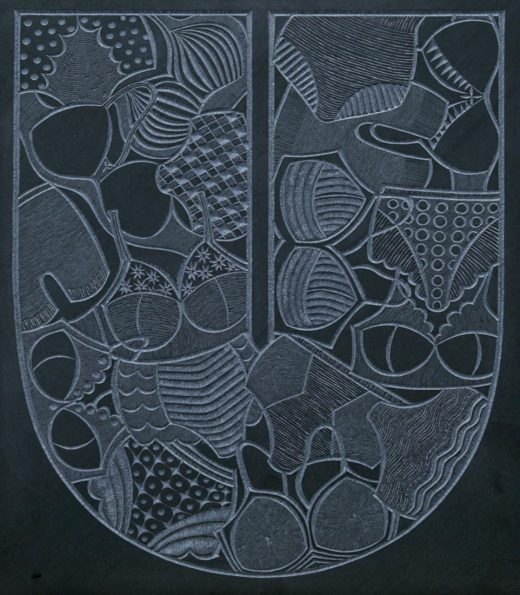 Charlotte comments, “I chose the letter U because it can be symmetrical, and therefore, I thought I could carve something and also take a print from the carving – making an interesting process for myself! The U is also big, a bit like a pair of super large knickers. We have quite a few funny underwear stories in my family, and the idea just planted itself into my mind, a visual image, ready to be made. In some ways, the work is a celebration of ageing and an acceptance of size, a joyful admission and glamorisation of a middle age woman’s underwear – and why not?”

The letters of the alphabet are the building blocks of our writing system, conveying the written word and the sounds of a spoken language. This random handful of marks, lines and shapes opens up a universe of thought and shared ideas, of experience, learning and exploration. Two basic elements – a straight stroke and a curved stroke – combine to give us the 26 distinct shapes we are familiar with. Shapes that, in their differing styles, give words a voice and character and enhance the meaning of the text.