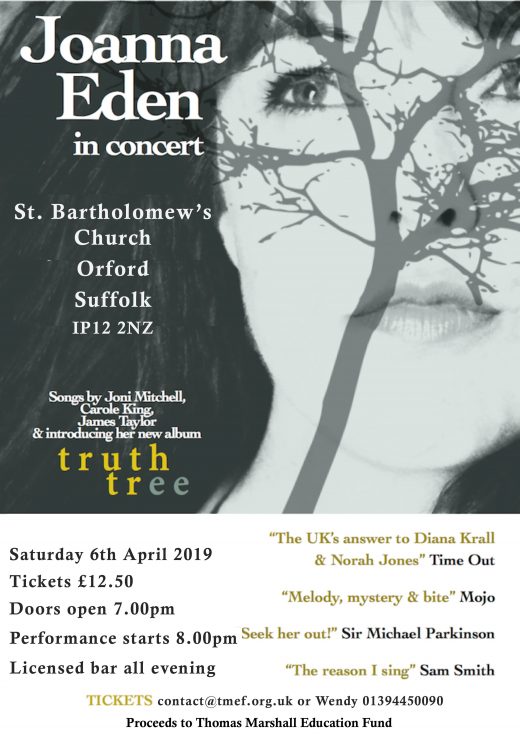 In 2007 a young Joanna Eden captivated the audience at Picnic Jazz at The Pavilion in Orford with her pure voice and outstanding piano playing.

We are delighted that she has agreed to include Orford Church in her national Truth Tree tour to help raise funds for the Thomas Marshall Education Fund.

Joanna says: “I’m so excited to be touring this album to beautiful churches, chapels and cathedrals all over the country. If you like the music of Joni Mitchell, Carole King, James Taylor and Kate Bush, Truth Tree should appeal to you”.

Lincolnshire born Joanna Eden wrote and performed her first song Happy December age seven.  The daughter of a musician and a drama teacher she could read music before she could write, studied piano from age 4 and left university 17 years later with her first tour (with college Indie-band ‘Precious’), an all-consuming love of Ella Fitzgerald and a weakness for drummers.

Since then, she has released 4 albums and over 35 original songs.

Joanna has performed her jazz influenced original music all over the world and supported world-class artists including Jamie Cullum, the Buena Vista Social Club, Ronan Keating and the Blockheads.

Sir Michael Parkinson instructed his Radio 2 listeners to “seek her out” and jazz legend Courtney Pine champions her recordings on his BBC Radio 2 show, while Jamie Cullum describes her as “Brilliant!”.

She has performed live on BBC Radio 4’s Woman’s Hour and Mojo Magazine has given her original albums rave reviews stating that her songs have “melody, mystery and bite!”.  Time Out described Joanna as “the UK’s answer to Diana Krall and Norah Jones.”

Joanna has been a singing teacher for 12 years and is so proud that her first student Sam Smith has become an international star and highest selling debut artist in the US since records began.  She began teaching Sam when he was just ten years old, coached him throughout his childhood and introduced him to song writing, co-writing and producing his first demo tracks.  She is a vocal coach for the popular music and performing arts degree courses at Anglia Ruskin University.

So, if you like the music of Joni Mitchell, Carole King, James Taylor and Kate Bush we can guarantee you a wonderful evening with great music in the magnificent acoustic of St. Bartholomew’s Church. Doors and bar open at 7.00 pm with a support act playing from 7.30 pm before Joanna takes over from 8.00 pm. There will be a few tables available as well as unreserved seating and the bar will be open during the performances so do book now for this special event.