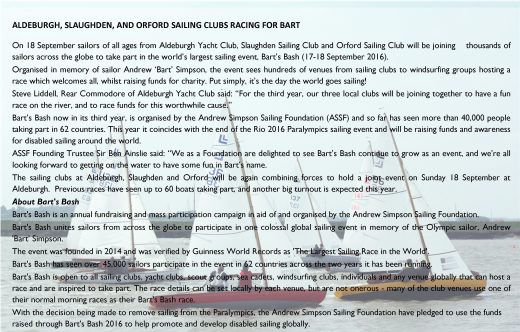 On 18 September sailors of all ages from Aldeburgh Yacht Club, Slaughden Sailing Club and Orford Sailing Club will be joining thousands of sailors across the globe to take part in the world’s largest sailing event, Bart’s Bash (17-18 September 2016).

Organised in memory of sailor Andrew ‘Bart’ Simpson, the event sees hundreds of venues from sailing clubs to windsurfing groups hosting a race which welcomes all, whilst raising funds for charity. Put simply, it’s the day the world goes sailing!

The sailing clubs at Aldeburgh, Slaughden and Orford will be again combining forces to hold a joint event on Sunday 18 September at Aldeburgh.  Previous races have seen up to 60 boats taking part, and another big turnout is expected this year.